Mini Chocolate Cream Pies are the perfect pies to make if youd like to serve pie in individual serving portions. 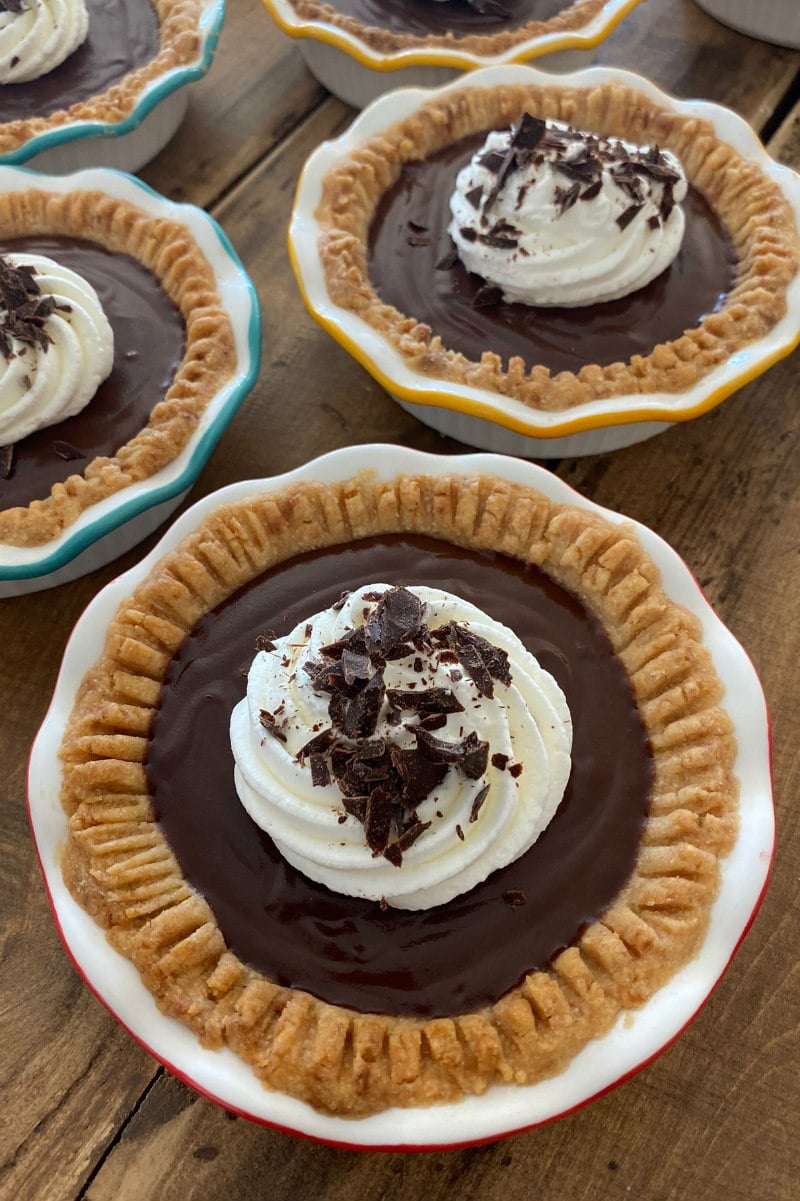 Chocolate cream pie is a delicious, rich chocolate pudding pie that is spooned into a baked crust. Its generally topped with freshly whipped cream too. These are a miniature version of the classic chocolate cream pie. You can serve them as an individual dessert after a meal, but theyre substantial enough to serve as a shared dessert for two as well. 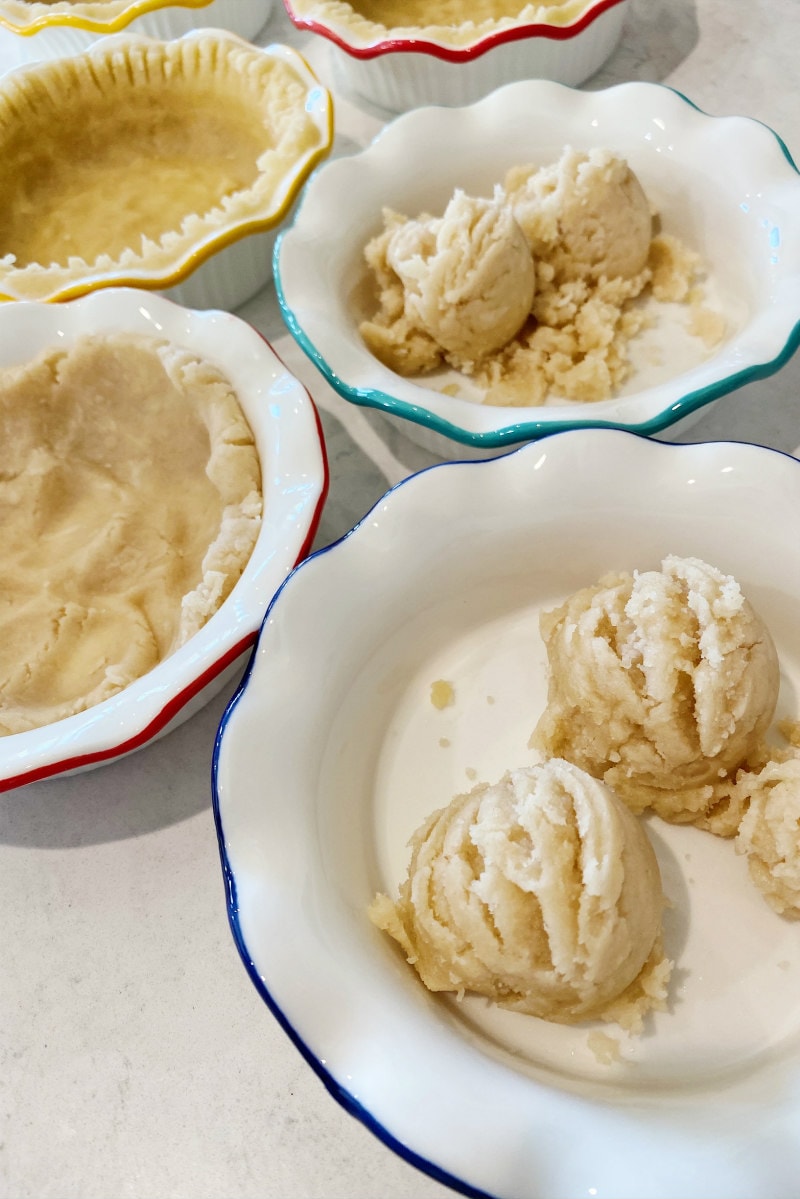 The crust for this pie is so simple because its an oil-based crust and there is no rolling needed. You simply divide the pie dough between your mini pie pans and press the dough into the bottom and up the sides of the pans. 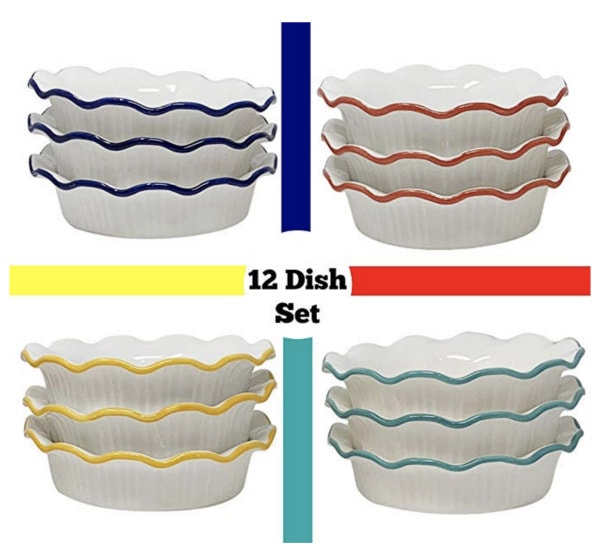 There are Amazon affiliate links included in this post.

Speaking of pie pans, I just ordered these porcelain ceramic mini pie pans. This is the first recipe I have used them for, and they worked out great! They come in a set of twelve, and I thought they were very reasonably priced for such a large set. I plan to use them for mini chicken pot pies too! 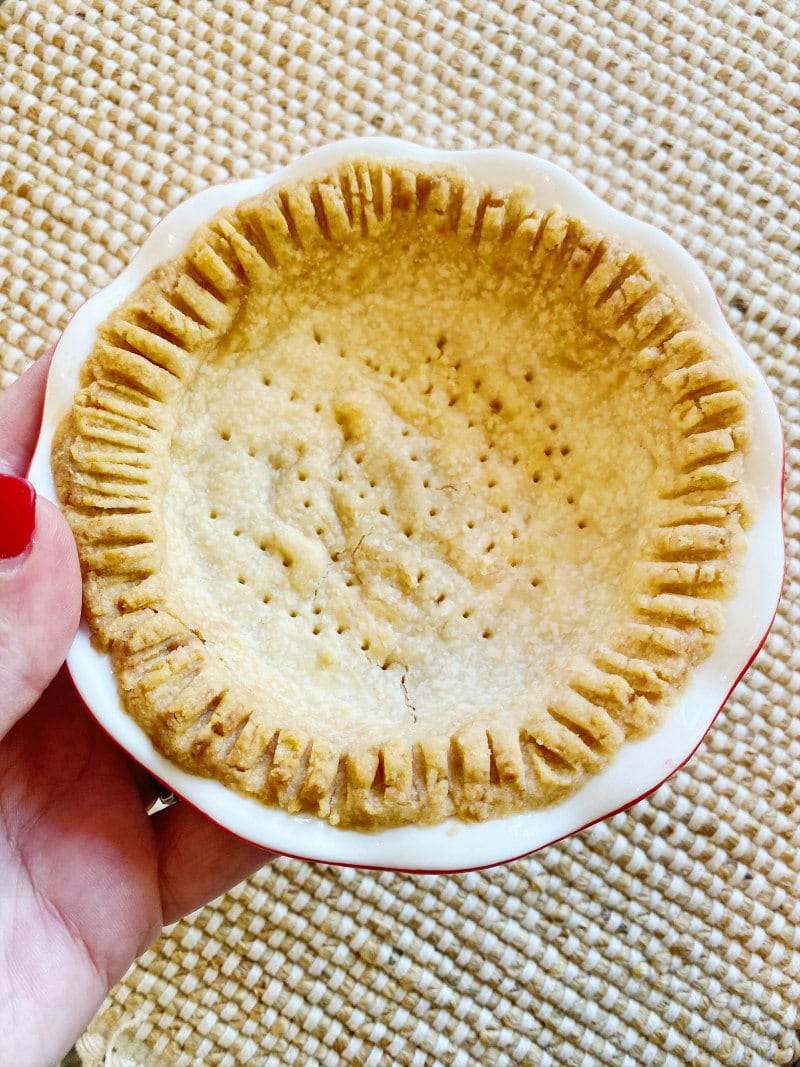 The crust bakes up perfectly nice and golden brown! After baking, the pans are set aside to cool while you make the chocolate filling. 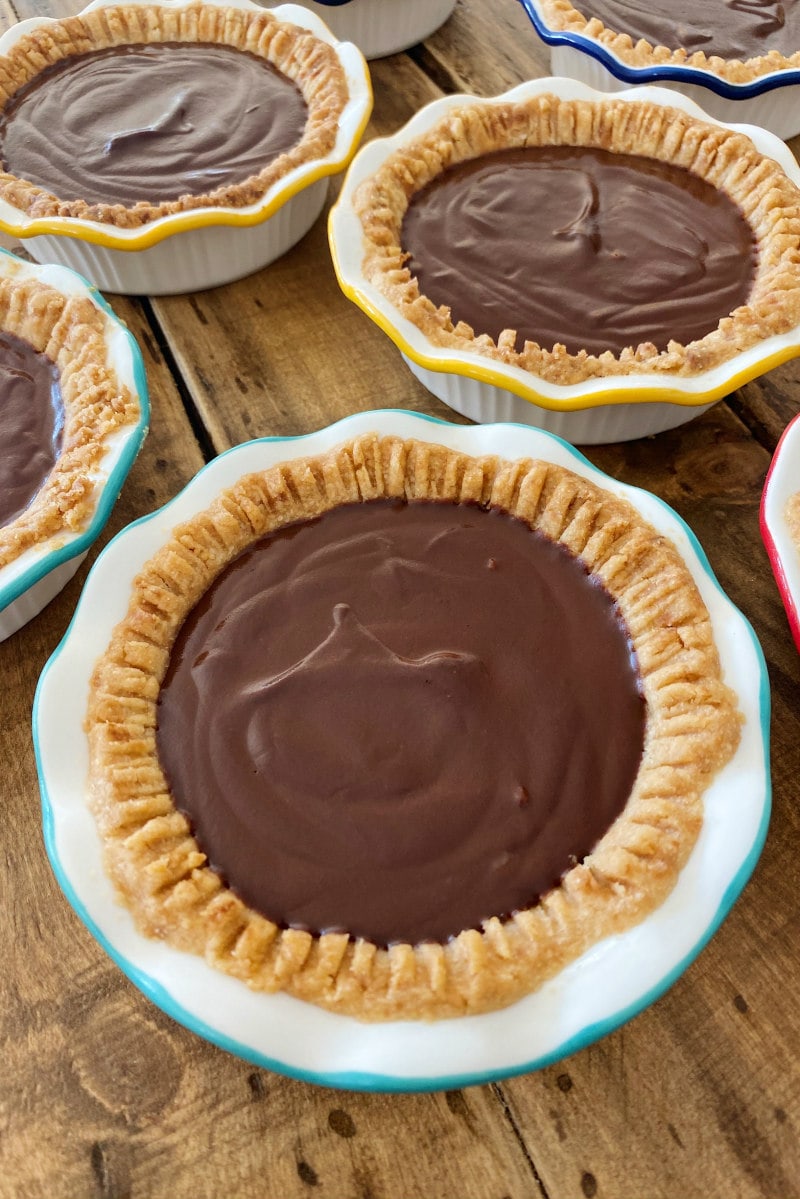 In a saucepan, youll combine sugar, cornstarch, cocoa powder and salt. Then youll whisk in a little bit of cream and egg yolks. Next youll warm the mixture over medium heat and whisk in more cream and milk. Youll bring it just to a boil, and then youll remove it from heat and pour the hot mixture over the chocolate in the bowl. The heat will melt the chocolate and butter, and youll just whisk to combine until the chocolate filling is nice and smooth. That filling is then refrigerated until cooled. 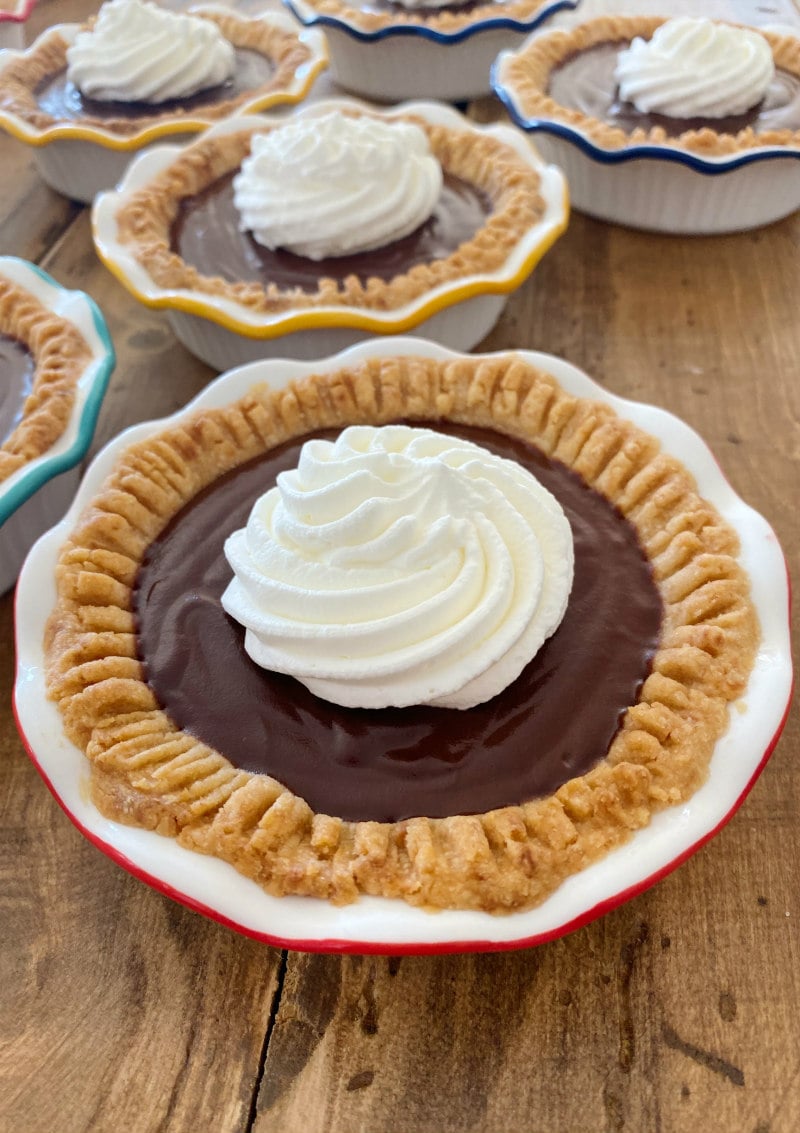 When you are ready to assemble the pies, simply divide the chocolate filling between the pies. Top with freshly whipped cream. 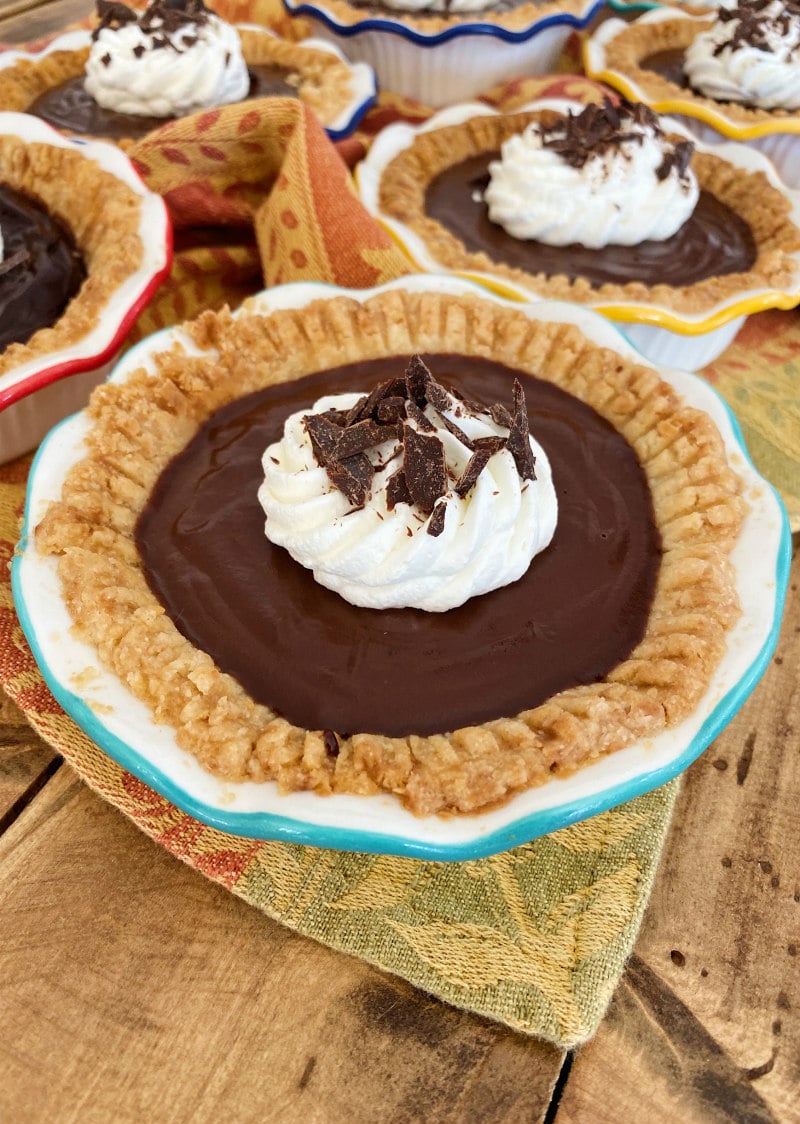 I added a few chocolate shavings on top for a decorative touch, but thats completely optional. 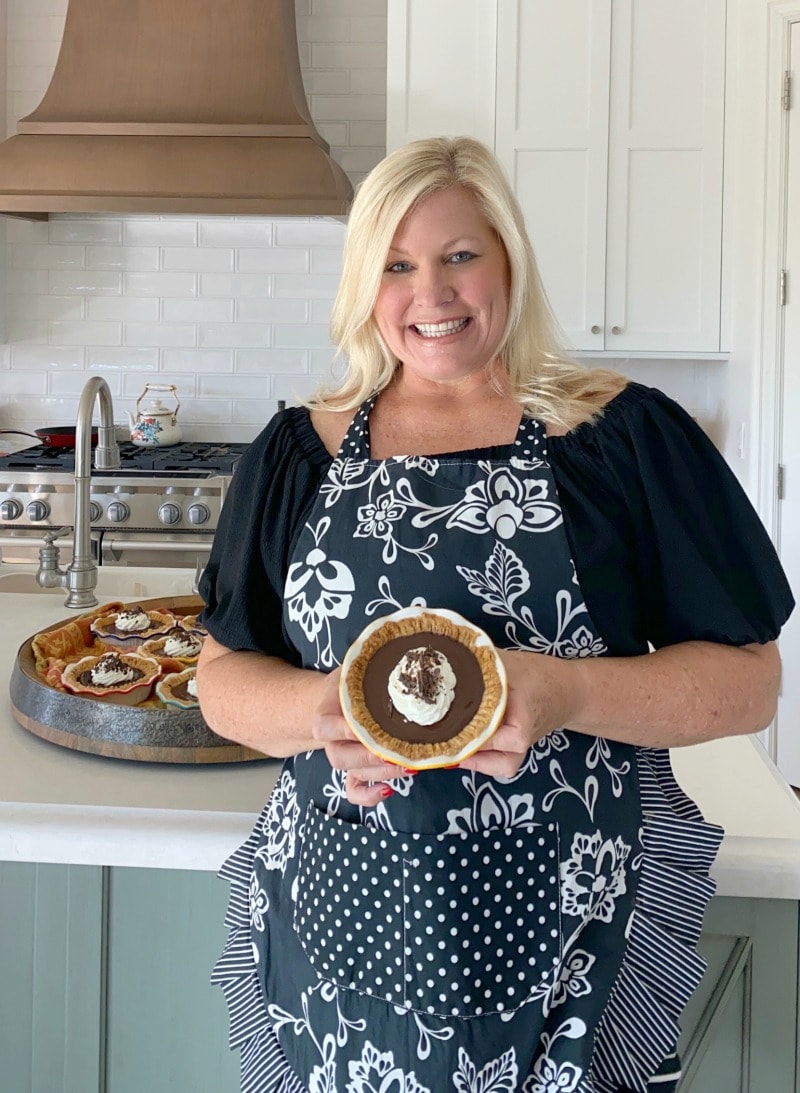 And now youve got your cute mini chocolate cream pies to share for dessert! My thought is that this would be a nice dessert to serve at a couples dinner party. The pies are big enough for each couple to share a pie. Enjoy! 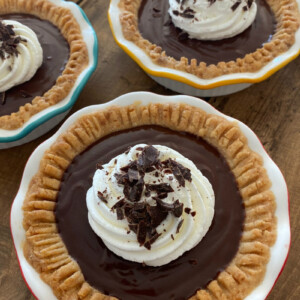