Your cart
This recipe for sticky pecan buns is made unique with Stonewall Kitchen’s caramel apple butter—jump to the recipe! The caramel apple butter gives these buns a gooey filling with plenty of caramel and cinnamon flavors, making these buns the perfect fall treat. As always, all thoughts and opinions are my own, and thank you for supporting the sponsors that keep Hummingbird High up and running! 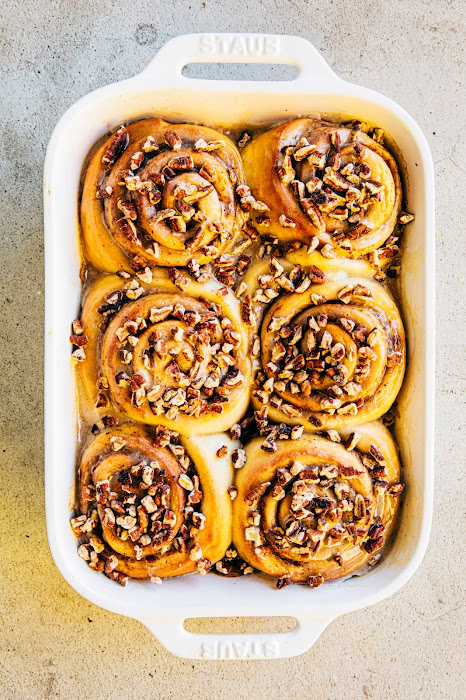 When I was younger, my mom and I used to go to the movies at the mall every weekend. We’d also usually treat ourselves to a meal or snack before our feature film. My favorite treat, of course, was sweet—I would drag her to the cinnamon roll stand (which of course, smelled delicious a mile away) and alternate between ordering one of their classic cinnamon rolls and the pecan sticky buns.

Although I’m no stranger to making cinnamon rolls (see: literally every bun recipe on my blog, lol), it never occurred to me to make pecan sticky buns at home until this year. I decided to see if I could turn the overnight small-batch cinnamon rolls in my new cookbook, Weeknight Baking, into a pecan sticky bun situation.

And even though I say this about literally every recipe in my book, I especially love the cinnamon rolls because they are SO. FREAKING. EASY. One of my least favorite things about working with yeasted dough is how time-consuming it can be—you usually first have to make the dough, wait for it to rise for about an hour or so, punch it down and shape it, let it rise AGAIN, and then finally bake it. The whole thing can take at least four hours (often times, more)!

While I’m not saying that the cinnamon roll recipe in my book is faster (because unfortunately, there’s no way around waiting for the dough to rise), I did write the recipe in a way that makes it feel like you’re spending less time in the kitchen. Specifically, I instruct you to let the dough rise overnight in the fridge and break the work up over a series of two days—that way, you’re not stuck in the kitchen for hours at a time. I’m hoping that, when adapting the cinnamon roll recipe into a pecan sticky bun one, I’ll end up with a pretty easy homemade sticky bun recipe too. 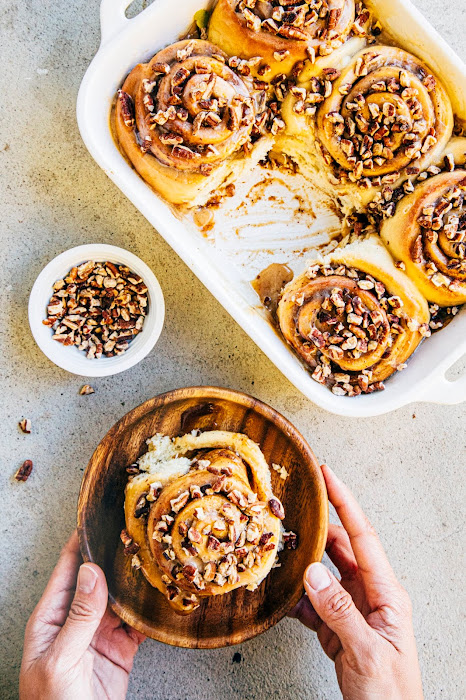 But here’s the rub: a few weeks ago, I was rushing through the mall while running errands. I was stopped in my tracks by that cinnamon roll stand’s signature scent. And lo and behold, they were also handing out samples of the pecan sticky buns that I remembered so fondly from my childhood!

Now, I wish I could say that it as delicious as how I remembered it to be. But that sadly wasn’t the case at all. My bite was sickly sweet, with no other flavors beyond sugar. I walked away disappointed, but with ideas for how to make my homemade sticky bun recipe better, too. I knew that a good sticky bun recipe shouldn’t just rely on sugar alone. It needed more flavors. Usually, I’d reach for spices like cinnamon, but I really wanted to make my sticky bun recipe distinct from my cinnamon roll one.

When I lived in New York City, I had an acquaintance who would take the train to work every morning from upstate New York. Although his commute was a nightmare, he was lucky enough to have several apple trees in his yard. In the fall, he’d walk around handing me and my other coworkers jars of homemade apple butter.

I’ve since lost touch with that coworker, but think about his apple butter every fall. I didn’t want to go through the hassle of making my own apple butter at home, so I decided to try and source some pre-made jars instead. I especially love this caramel apple butter from Stonewall Kitchen; I’ve worked with Stonewall Kitchen for many years now, and truly believe that their jams and jellies are the best you can buy. This apple butter has just the right amount of caramel in it too—it is just sweet enough to balance out the acidity of the apples. It was the perfect filling for these pecan sticky buns. 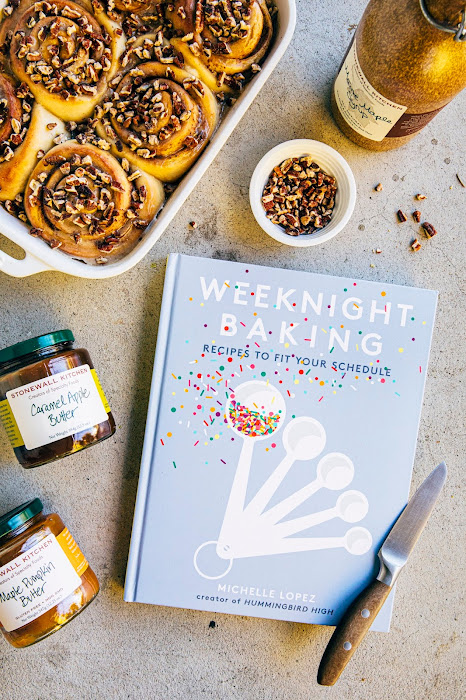 In addition to recipes like these sticky buns, you can use apple butter as a jam or jelly on toast, pancakes, waffles, and other breakfast treats. For something less decadent, Erlend actually likes to stir a spoonful into his morning oatmeal, making it a great substitute for refined sugar in the morning.

But I’ve seen apple butter used in unconventional ways too. My coworker from yesteryear liked to use his in traditionally savory recipes, adding spoonfuls of the stuff to mashed sweet potatoes and butternut squash soup. In fact, on my last day of work at the company (because fun fact: I quit that job in order to write Weeknight Baking!), he was even trying to convince me of the merits of using it on pizza as a substitute for tomato sauce!

Between you and me, I don’t think I’m ever going to try that recipe tip, lol. I’m boring—I like my pizzas to be savory and my desserts to be sweet. Instead, I think I’ll just stick with these caramel apple sticky buns—complete with a finishing of toasted pecans, they’re absolutely perfect! If you like the way the recipe sounds, be sure to head on over to Instagram—I’m doing a giveaway of a copy of Weeknight Baking and some of my favorite baking tools and Stonewall Kitchen ingredients, including:


I specifically asked Stonewall Kitchen to include certain things like seedless jams because they’re the ingredients I recommend for some of the recipes in the book. It’s the absolute fall care package, perfect for staying inside and having a cozy time in while baking. Good luck! 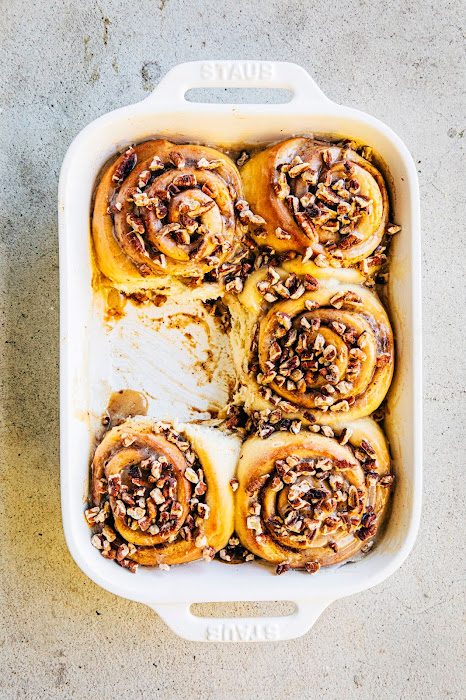